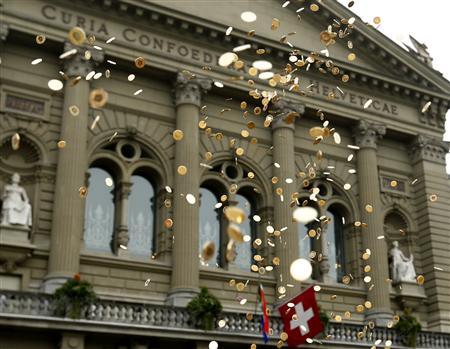 (Reuters) – Switzerland will hold a vote on whether to introduce a basic income for all adults, in a further sign of growing public activism over pay inequality since the financial crisis.

A grassroots committee is calling for all adults in Switzerland to receive an unconditional income of 2,500 Swiss francs ($2,800) per month from the state, with the aim of providing a financial safety net for the population.

Organizers submitted more than the 100,000 signatures needed to call a referendum on Friday and tipped a truckload of 8 million five-rappen coins outside the parliament building in Berne, one for each person living in Switzerland.

In March, Swiss voters backed some of the world’s strictest controls on executive pay, forcing public companies to give shareholders a binding vote on compensation.

A separate proposal to limit monthly executive pay to no more than [12 times] what the company’s lowest-paid staff earn in a year, the so-called 1:12 initiative, faces a popular vote on November 24. [In the US top executives earn 350-400 times the income of the lowest-paid employees. –PR]

Direct Democracy — US vs the Swiss

In the US, getting 100,000 signatures on a petition at whitehouse.gov (presently a shutdown casualty) within 30 days supposedly will get you an official response from somebody at the Whitehouse. Gee! Sort of like those vague, non-committal letters you get back if you contact your Congressperson about some topic?

In Switzerland, 100,000 signatures automatically puts your petition on the ballot for a national referendum!

“Frequent referendums concerning changes to the constitution as well as laws are the key element of Switzerland’s unique and well established tradtion of Direct Democracy. More than 100 years of experience with referendums on national, cantonal and communal level have shown that Switzerland’s system of referendums guarantees not only a maximum amount of self-determination to the citizens but also a stability of the political system Switzerland is often envied for.”

So Abraham Lincoln’s “government of the people, by the people, for the people” (and Ben Franklin’s “Republic, if we can keep it”) has not perished from the earth; only from the US; and it has moved to Switzerland.

“Only a virtuous people are capable of freedom. As nations become more corrupt and vicious, they have more need of masters.”

and with no little irony he wrote to Joshua Babcock:

“I have lately made a Tour thro’ Ireland and Scotland. In these Countries a small Part of the Society are Landlords, great Noblemen and Gentlemen, extreamly opulent, living in the highest Affluence and Magnificence: The Bulk of the People Tenants, extreamly poor, living in the most sordid Wretchedness in dirty Hovels of Mud and Straw, and cloathed only in Rags. I thought often of the Happiness of New England, where every Man is a Freeholder, has a Vote in publick Affairs, lives in a tidy warm House, has plenty of good Food and Fewel, with whole Cloaths from Head to Foot, the Manufactury perhaps of his own Family. Long may they continue in this Situation! But if they should ever envy the Trade of these Countries, I can put them in a Way to obtain a Share of it. Let them with three fourths of the People of Ireland, live the Year round on Potatoes and Butter milk, without Shirts, then may their Merchants export Beef, Butter and Linnen. Let them with the Generality of the Common People of Scotland go Barefoot, then may they make large Exports in Shoes and Stockings: And if they will be content to wear Rags like the Spinners and Weavers of England, they may make Cloths and Stuffs for all Parts of the World. Farther, if my Countrymen should ever wish for the Honour of having among them a Gentry enormously wealthy, let them sell their Farms and pay rack’d Rents; the Scale of the Landlords will rise as that of the Tenants is depress’d who will soon become poor, tattered, dirty, and abject in Spirit. Had I never been in the American Colonies, but was to form my Judgment of Civil Society by what I have lately seen, I should never advise a Nation of Savages to admit of Civilisation: For I assure you, that in the Possession and Enjoyment of the various Comforts of Life, compar’d to these People every [American] Indian is a Gentleman: And the Effect of this kind of Civil Society seems only to be, the depressing Multitudes below the Savage State that a few may be rais’d above it.”

“The subjects of every state ought to contribute toward the support of the government, as nearly as possible, in proportion to their respective abilities; that is, in proportion to the revenue which they respectively enjoy under the protection of the state ….[As Henry Home (Lord Kames) has written, a goal of taxation should be to] ‘remedy inequality of riches as much as possible, by relieving the poor and burdening the rich.'” — Adam Smith

One Response to “Swiss to vote on 2,500 franc basic income”