Humans are eusocial. We form colonies and superorganisms as do ants and bees. These superorganisms are defined by and embodied as networks or webs of patterns that are recognized and recapitulated by their member organisms. Human superorganisms (multihumanisms) are sometimes vaguely understood as families, communities, tribes, colonies, corporations, states, etc. 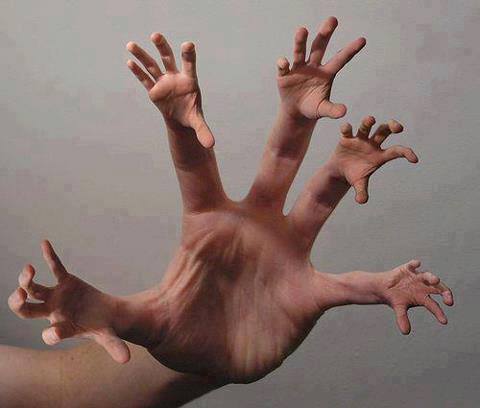 A superorganism may have metabolism, physiology, and cognition. Multihumanisms overlap or interpenetrate to various degrees with other superorganisms, including other multihumanisms, in their environments. Different multihumanisms have differing degrees of stability or permanence, pattern density, pattern regularity, etc. They also differ in the number of individuals of which they are composed. They range from whispy, ephemeral things to highly substantial and long lasting things. Many existing multihumanisms are still surviving from antiquity.  Besides their ability to interpenetrate and interact with each other, multiple multihumanisms can have family ties and family trees. Individuals can be related to the other members of a multihumanism biologically (via genes), cognitively (via memes), or both.

The idea of a multihumanism has been around in various forms for ages. I first wrote about it a few years ago in Stalking The Wild Multihumanism. But the degree to which multihumanisms are literally real and organic; and a simple, concrete way in which they have metabolism, physiology, cognition, and coordinated behaviors; came to me very recently in a dream. In this dream I found myself a stranger in a small urban center in what seemed like ancient India. I didn’t know how I got there and I was apprehensive and hypervigilant. Most of the people around me appeared to be peasants. The major architecture was grand but it seemed old and poorly maintained. The newer minor structures were ramshackle.

I was in an open square. I tried to watch and interpret the behavior patterns of those around me. Some were partaking from what seemed to be sparse public supplies of food and drink. I watched one man roll a small ball of food at the edge of an open platter. Once or twice he dipped the ball in a dish and then rolled it more with his fingers. In one hand he held a wooden or bamboo tube from which he occasionally drew a small stick. The tube seemed to hold a variety of these sticks. Each stick appeared to be inscribed with marks or symbols and I took them to be some kind of texts. Eventually I perceived a repetative pattern by which the man rolled and dipped the balls of food on the public platter, drank from a public gourd dipped in an open stone reservoir about one foot in diameter, and fingered the little sticks.

I watched other people, many dressed in various degrees of rags, come and go about the square and the smaller structures around it. I noticed they seemed to follow common paths. No one cut diagonally across an open area. I gradually perceived there were major paths and minor paths, and I could see the traces of some of these paths worn by bare feet into the stone paving of the square. They may have been following these same paths for hundreds or thousands of years by the look of the major buildings surrounding the square.

At first any moves or activities on my part drew attention. I realized that deviating from any of the normal, expected behavior patterns would reveal me as a stranger and perhaps, to some, as a threat. So I began to try to progressively fit in to the patterns I observed. I was a quick study, as I think most people are when motivated by paranoia and self preservation. Perhaps we owe our ability to rapidly detect and assimilate social patterns to our large brain size, or vice versa.

I listened carefully to the verbal communication around me, especially it’s tonal and emotional qualities; but since I had no language in common with these people, I became highly sensitized to their conduct, their body language, microexpressions, etc. I quickly became progressively more familiar with many kinds of patterns, patterns of patterns, and patterns within patterns. I was learning how to become part of a multihumanism. Eventually I would perceive that this city and its families, communities and tribes were multiple interrelated and interdependent multihumanisms.

I noticed that activity patterns were often closely related to the design of the spaces in which they took place. I realized that activities often involved combinations of breathing common air, eating and drinking common food and water supplies, and touching common materials, objects, structures, etc. In all these activities there was an incidental transference of messages, memes, energies, chemicals (including pheromones), microrganisms,  parasites (which may transfer blood from one person to another), and materials such as dirt, fecal material, etc. In these pattern recapitulations, combinations, and transfers I began to see the metabolism, physiology, and cognition of the multihumanisms.

As I learned to fit in with the social patterns around me in my dream, my participation in each particular pattern would become more automatic and subconscious over time. The assimilation process and the assimilated patterns are largely subconscious. We are only vaguely conscious of the multihumanisms in which we live and breathe and have our being. But many of the memes and narratives in which we believe most firmly were passed to us via the multihumanisms in which we subconsciously, automatically participate and which helped shape our individual development and cognition.

One of the main points that I took from my dream “revelations” was that the concept of human superorganisms was not just a metaphor or a potential in our possible future evolution, as I formerly thought. Instead the literal, organic existence of human superorganisms and the participation of a vast majority of human individuals in them by default goes back into the early prehistory of our species, and perhaps as far back as pre-human primates. Most of this remains invisible or at most metaphorical to us because our participation in our superorganisms is mostly subconscious.

We may need a great deal of research to make our superorganisms more visible and tangible for us. We need to improve our ability to recognize them, find their boundaries and overlaps, understand their biology and cognition, and discover the ways that our superorganisms mold us, their individual members.

Living systems are open self-organizing living things that interact with their environment. These systems are maintained by flows of information, energy and matter.