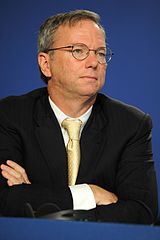 Is Eric Schmidt, the Executive Chairman (and until recently CEO) of Google, a Trojan Horse with secret loyalties to Bill Gates, Jr. and the super-rich?

A member of the Bilderberg Group, Schmidt is a multi-billionaire despite his dubious executive track record.

The way he rapidly ran Novell, Inc. into the ground in the late 90’s looked more like deliberate sabbotage than incompetence or bad luck. He certainly ignored some good advice I gave him at Comdex in 1997.

In addition to taking down Novell, the major competetor in 1997 to Microsoft’s local area networking (LAN) and internet products, he also took down Word Perfect and Netscape, the main competitors to Microsoft’s desktop products including Internet Explorer, Microsoft Office, and Microsoft Mail, in the process. In effect, he caused Novell to recklessly acquire many of Microsoft’s main competitors and then, overextended and poorly managed, to tank.

I was there and saw a lot of it go down.

If Google seems to have discarded its “Don’t be evil” resolve, we may not need to look much farther than Mr. Eric Schmidt.