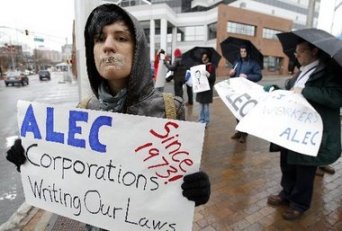 As we know, ALEC is the American Legislative Exchange Council, a shady organization that mass-produces canned legislation in service to the corporate neofeudalist agenda.

Friends, brothers, and sisters . . . I come not to bury ALEC but to praise it — not for its deeds, but for its design.

We often confuse the evil men do with the tools and logistics used. I don’t think many progressives yet see the potential for good and for actually promoting direct democracy hidden in the ALEC model because of how it has been abused. I think that’s why things like ALICE  (ALEC’s non-evil, progressive twin) aren’t getting more support.

When I look under the hood of the ALEC machine with a system analyst’s eye I see some things that I like. If the 1% plutocons had not invented the ALEC model, the 99% would need to do it. ALEC is to politics as genetic engineering is to old-fashioned selective breeding. It takes the process of creating legislation from being an art to being a science and technology. And as destructive as such political engineering can be in the wrong hands, its technical innovations are potentially a good thing for participatory democracy.

“ALEC’s astonishing influence exposes the progressive Achilles’ heel: a lack of a similarly entrenched, nationwide infrastructure of state and local policymakers and advocates that can create and support lasting change.” (Katrina vanden Heuval, Deepening the progressive bench, via The Democratic Startegist)

In politics, liberals are still bringing protest signs to what has become, in the era of ALEC and other authoritarian political innovations, a gun fight (sometimes literally). It’s hard not to envy the 1% such a big, swinging tool.

Of course the ALEC model, as implemented by the 1%, violates tax and lobbying laws. We need to bust them HARD on that. Common Cause is calling for a tax fraud investigation. Meanwhile, we need to copy, hack, and re-mix parts of the ALEC model into a new model that is a venue for creating public interest open source legislation.  The right-wing ALEC is run like a criminal conspiracy. A citizens’ Open Legislative Exchange Council (OLEC) can be run like a democratic cooperative. The old ALEC is sick in the original sense of the word but a new public-interest OLEC could be sick in a street way, yo?

Why bother? Many state legislatures still have part-time and/or unpaid lawmakers with small or shared staffs. This makes them very susceptible to lobbyists who will hand them ready-made bills on a platter (not that corporate-sponsored national legislators aren’t, too). And we still want to think that legislators should be regular people, 99% people, who need not be professional career politicians, insiders, or technocrats who are independently wealthy and technically capable of writing good legislation in their spare time.

What ALEC prefers to do with as much secrecy as possible, the 99% can do in full daylight. An open version of the ALEC model can give all stakeholders in the 99% community a fair place at the legislative drafting table and every stakeholder can have a  position on the people’s “open legislative assembly line”. Our legacy political institutions often failed to do that even before they were captured by 1%  money.

Part of the Occupy Wall Street movement could undertake to re-engineer the ALEC model to be consistent with 99% values and methods such as crowd-sourcing and open source collaboration. I think such adaptations would actually increase the tactical power of the model. A green ALEC could research, engineer, and promote legislative projects that would implement much of the OWS 99% agenda through well-crafted, enlightened and responsible species of open-source legislation. Instead of being governed by and catering to profit-motivated corporations, Citizens’ OLECs would be  governed by and accountable to public interest groups and activists across the 99% spectrum.

“On January 18th, we saw a day of online protest that at least for now killed SOPA and Protect IP. The Reddit community was one of many that played a huge role in pressuring not only businesses like GoDaddy to change their stance, but also members of Congress like Paul Ryan. Now, the community has come up with a proposed plan to create a piece of legislation, called the Free Internet Act, Reddit Co-Founder Alexis Ohanian explains.”

The U.S. congress’s attempts at e-democracy have been a “baby step compared to what others have done around the world,” says Matt Lira, the digital communication director for Congressman Eric Cantor. For Lira, there are some key reasons why he’s had difficulty pressuring Congress to become more digitally savvy. He contends that the political party in power has little incentive to give up authority to an experimental process that may tip the balance of power. Congress’s two most significant e-initiatives have been launched by Republicans — America Speaking Out, an aggregation platform where users list and prioritize various social issues, and YouCut, an SMS-based voting system to select which programs a few Republican congressman will attempt to cut.  (mashable.com)

The Republicans may be slow to adopt e-democracy, but it seems they are way ahead of the 99%! Other countries, including Brazil, are ahead of us, too. We will need to elect more progressive legislators and get money out of the political process before we can make democracy much more participatory. But a tool like a citizens’ Open Legislative Exchange Council should be invaluable to a new class of 99% citizen-legislators and voters.

Know the enemy and steal the advantage: 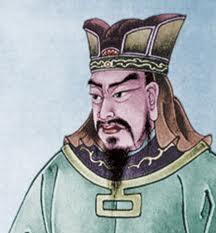 Addendum for techies What kind of technology platform do we need for open, crowd sourced legislation development? I hate to say it, but we probably need at least the same caliber of development tool-set used to build things like Linux or other huge software projects. It would be a highly integrated and graphical development environment with ungodly enterprise-class content management and project management capability. Last but not least you’d want a great semantic “legislation debugger”. After all, legislation is a hell of a lot like a giant  code repository. There would be a very large “legislation developer” community with different skill sets. It might take a half dozen different user interfaces for different classes of participants and different client devices (notebooks, tablets, smart phones, etc.) I think the shortest path might be integrating and customizing some of the open source enterprise-class applications out there like Eclipse and whatever the biggest CMS might be. Wikis have the scalability but not the ease of use necessary for all classes of users. It all has to run as web services so users only need a browser. I think we’re talking a chunk of change and a very good team to build something like that.  Any feedback would be nice.