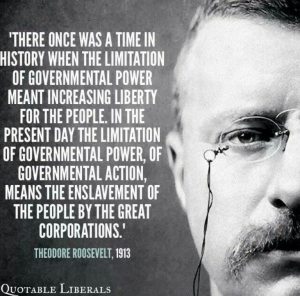 One type of libertarian naively believes that “Without the crushing rule of law, society will do a better job of regulating itself” (The Simpsons Season 19, Episode 3). Another type of libertarian is a sociopath who pays lip service to the “freedoms” of others but shows contempt for others whenever his own interests conflict with theirs.

The true and false sharing systems (economies) should not be confused. I suggest basing the distinction on their long-term impacts on the distribution of wealth and power. Undercutting regulations intended to protect workers, consumers, investors, etc. without establishing adequate alternative forms of protection, might indicate a false economy. Coop principles and best practices, such as the Rochdale Principles and multi-stakeholder cooperatives, might go a long way towards avoiding false economies.

Free speech is necessary but not sufficient. Its pretty worthless without information quality control.

I suspect a large percentage of police suffer from undiagnosed PTSD and it may be a big factor in excessive force.  Excessive force should be prosecuted strongly but it seldom is, and that would not change the fact that our entire society is too militant, violent, and racist. Behavior doesn’t come from a vacuum. Take, for example, the Stanford Prison Experiment.

Will political apps evolve towards automating democracy? Are human life and consciousness just highly complex algorithms? I tentatively think so. The main problems with reverse-engineering human behavior are 1) quality control and 2) applications. Both tend to be dominated by the 1%.

— Revealed – the capitalist network that runs the world

NewScientist, Physics and Math. “The work, to be published in PLoS One, revealed a core of 1318 companies with interlocking ownerships (see image).”

Does the term “interlocking ownerships” include interlocking boards of directors? Is the latter addressed at all? My hypothesis is that a small group of “Evil Wizards” runs the world. Many may be on life support in secret, fortified medical facilities. They anonymously direct the world’s governments and corporations via law firms. It is possible that the Evil Wizards take orders from extraterrestrials.

“What’s at stake as officials debate Greece’s proposals for a renegotiated bailout is whether Europe stays committed to a radical neoliberal agenda or shifts back toward a social market economy, says DW’s Jasper Sky.”

Neoliberalism = a pseudo-academic facade for irrational market fundamentalism. A social market economy need not be ideological at all, but merely address the empirical realities of market failures.

— New work suggests “a universe that was once much smaller, but never had the infinite density currently postulated.”

I can’t follow the actual math, but I have always been skeptical of singularities with infinite density in a dimensionless point. That has never been demonstrated empirically and it seems like an unparsimonious sort of hypothesis. “A very high density in a very small space” seems much more prudent to me.

Frequently funny, often without resorting to the usual stupidities.

No, You Shut Up!
A comedy-news program, hosted by Paul F. Tompkins and his puppet cohorts, that takes on the issues of the day until everyone gets too angry to discuss them any further. (fusion.net)