Why is Mitt Romney so confident?

In states where the winner will be decided by less than 10%, of the vote he already knows he will win. This is no tinfoil hat conspiracy. It’s a maths problem. And mathematics showed changes in actual raw voting data that had no statistical correlation other than programmable computer fraud. This computer fraud resulted in votes being flipped from Democrat to Republican in every federal, senatorial, congressional and gubernatorial election since 2008 (thus far) and in the 2012 primary contests from other Republicans to Mitt Romney.

This goes well beyond Romney’s investment control in voting machine maker Hart Intercivic and Diebold’s close ties to George W. Bush. Indeed all five voting machine companies have very strong GOP fundraising ties, yet executives (including the candidate’s son Tagg Romney) insist there is no conflict between massively supporting one party financially whilst controlling the machines that record and count the votes.

A retired NSA analyst has spent several sleepless nights applying a simple formula to past election results across Arizona. His results showed across-the-board systemic election fraud on a coordinated and massive scale. But the analysis indicated that this only happens in larger precincts because anomalies in small precincts can be more easily detected.

“Easy to Cheat”
Retired NSA analyst Michael Duniho has worked for nearly seven years trying to understand voting anomalies in his home state of Arizona and Pima County. This publication has written extensively about apparent vote machine manipulation in a 2006 RTA Bond issue election that is still being fought in the courts. Said Duniho, “It is really easy to cheat using computers to count votes, because you can’t see what is going on in the machine.”

When Duniho applied a mathematical model to actual voting results in the largest voting precincts, he saw that only the large precincts suddenly trended towards Mitt Romney in the Arizona primary – and indeed all Republicans in every election since 2008 – by a factor of 8%-10%. The Republican candidate in every race saw an 8-10%. gain in his totals whilst the Democrat lost 8-10%. This is a swing of up to  20 point, enough to win an election unless a candidate was losing very badly.

Since sifting through and decoding massive amounts of data was his work for decades on behalf of the National Security Agency, he wanted to understand why this was ONLY happening in large precincts.

Nose Counting
The idea of examining large precinct results came via a link to a report written by Francois Choquette and James Johnson. Choquette became curious about South Carolina primary results in the February Republican contest. There a poll observer noted an unusually big gain of votes for Mitt Romney in larger precincts than in smaller ones. Choquette wanted to know why?

He examined and applied all of the normal statistical markers to see where a variance might occur: income level, population density, race, urban vs. rural, even party registration numbers. He found no correlation to explain why Romney votes trended upward while Paul and Santorum votes trended downward -yet only in large precincts.

Choquette then looked at all 50 states and found roughly a 10% switch in votes from Democrat to GOP. This was noted in every state except Utah, where the presumption was, as it was Mitt’s religious home state and very conservative, there was no chance of Romney losing and no variance was found.

Choquette even saw in Maricopa County, which is Phoenix and its suburbs, that in 2008 Romney used this technique against John McCain. But McCain beat him by too much for a 10% fraud gain to matter. McCain tried to do the same thing in the general election to President Obama but 9 million votes nationally were too many to make up.

Examining every county across America was too massive an undertaking for any one person so he included a simple set of instructions and encouraged others to do the same with raw vote totals in their county/state.

1. Download the text files of all raw actual vote results by precinct from the Secretary of State’s Office.

2. Arrange them in precinct order.

3. Put in all of the candidate totals for each precinct.

4. Sort the data by total vote smallest on the top.

A postscript by way of David Brin (davidbrin.blogspot.com), Wednesday, October 31, 2012

== The blatant examples are one-sided ==
I’ll offer just one detail here, though it screams the travesty.  In most blue states (e.g. California) the voting machines are either fed a hand-marked paper ballot to read, or else they provide a printed receipt that the voter can inspect and drop into a separate box. Either way, all votes made in that precinct can be audited.  No matter how many back doors and cheats might be built secretly into the machines or programs, no one will dare pull a major electronic switcheroo, if enough precincts will be randomly hand-counted and audited. 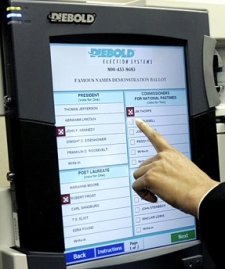 The same is not true in many red states, where GOP-run legislatures gave voting machine contracts to a trio of companies alll of whom have strong Republican Party connections.
(The address of one of those companies?  ES&S: 11208 John Galt Blvd. Omaha, NE   I kid you not.  John Galt Blvd.)
Moreover, in most red states that use electronic voting, the process does not involve a separate box of auditable paper ballots. No way for anyone to catch a glitch or falsified result.  Now why… why would they do that? Why would anyone do that, except in deliberate furtherance of fraud?