WTF is the Hex Model? In the “Ownership of the Commons” and a few previous comments in the P2P Group on Facebook I introduced the “Hex Model” framework:

The hex model was inspired by an essay by Helene Finidori, Systems Thinking and ‘Commons-Sense’ for a Sustainable World . There are probably other things like it out there, because it is practically a self-evident concept. It applies retroactively to everything I’ve written and read in the past few years on the commons, property, ecological economics, and similar topics. I would like to continue developing this concept through dialog here or in the P2P group.

The hex model is an analytical tool that is intended to help draw out and organize the key particulars of any resource use case. Widespread use of such a model might potentially standardize the way we collect and organize data across many research projects and fields of study. It also provides a semantic sub-ontology that could be added to many existing ontologies (e.g. classification systems, taxonomies, schema, vocabularies, folksonomies, etc.) for thinking about and discussing the interactions of people, places, and things. 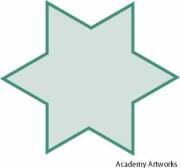 A six-pointed star formed by extending each of the sides of a regular hexagon into equilateral triangles.

The first triangle of the hex model hexagram are “objects”: people-places-things. These are variables that can be given concrete values taken from in vivo and in situ cases.

The second triangle combines two sets of algorithms and a set of results. The relations-rules-results are also taken from the same specific cases as the people-places-things.

Taken together, these elements and their arrangement may be used to model actual cases of socioeconomic activity. These elements can be arranged  like an equation in which the object variables are represented along with some arrangement of relations and rules. Any of the elements might appear on either side of the equation, but the expression on the left of the ” = ” would generally be the “inputs” and the expression on the right of the ” = ” would typically be the “output” or results.

I am trying to develop a common, generic scaffolding for organizing key particulars and metrics for the analysis of human-resource relations that will work across a variety of ontologies or idioms. Possession, access, ownership, authority, governance, control, and management might be thought of as similar things expressed in different idioms or seen from different perspectives. Control of property or resources (and commensurate responsibilities), is often distributed across various levels from state to community to group to individual. In most cases we find some degree of subsidiarity in these relations. But without appropriate and consistent models and data structures it can be difficult to compare, contrast, or quantify these things in any rigorous way, especially across different researchers, writers, activists, and domains.

In this particular formulation, as first framed, I did not see the hex model as prescriptive of practice except for analytical and rhetorical practice. The original aim was to capture particularities in commoning practice or any other in vivo and in situ socioeconomic practice and then analyze, contrast, compare, and discuss these particularities in a more rigorous way than is usually found in colloquial discourse and perhaps in some academic discourse. At  least we can aim at some terminology that might remain relatively coherent across multiple communities of interest.

But this just in…

Helene Finidori has suggested some adaptations of the hex model that might make it more applicable to “‘seeding’ or ‘domesticating’ emerging change,” or in other words to commoning practice rather than simply to analysis and rhetoric. Her suggestion consists of renaming and rearranging  the elements of the hex model as follows:

People-Domain (environment)-Interactions: This would form the first triangle and would “cater for virtual operations (think specification of boundaries of the commons or the system)”. (HF) Helen argues that “this is the relational context in which the emergent behavior arises, that can be ‘seeded’.”

Things (objects/assets)-Rules(culture)-Results: This forms the second triangle of elements that “make up the commons (as I described them), as outputs that can be measured, what is ‘produced’ by the emergent behavior of the system and become inputs as medium for interaction in the relational context in a feedback loop.” (HF)

I admit to some reluctance to abandon the “people, places, and things” triad precisely because it is a preexisting, familiar meme; but Helene’s suggestions have compelling force. I especially like the feedback loop or spiral perspective in which inputs become outputs and then feed back as new inputs.

At least it remains a HEX model, thank goodness, as I was quite attached to that. 🙂

But no worries for Poor Richard. Michael Maranda pulls all my old chestnuts (and perhaps some future ones) out of the fire with this compact gem:

“Interesting to consider the original triad groupings and the [Finidori] alternate that resulted from the discussion. As triads go, we don’t lose anything, because taking one triad or a different combination will be a matter of what facets are relevant for a given approach or in making particular points.” ~Michael Maranda

The hex model is really just a little high-level template for data. We have established that it can be permutated and instantiated in different ways to suit various ontologies or purposes. Of course when you actually get down to particulars at a level of granularity (a unit of land with various appurtenances, or an adequate functional description of a person, for example) many additional sub-categories and data structures would be required and many additional standards and specifications would be needed.

And now this is thrown open to the nascent commons community, to its critics, and even to the maddening crowd for comments, questions, and collaboration–a consummation devoutly to be wished.

A view of the Hex Model in DebateGraph

Resources, events, agents (REA) is a model of how an accounting system can be re-engineered for the computer age. REA is an ontology. The real objects included in the REA model are:

6 Responses to “WTF is the Hex Model?”