Social evolution: An ounce of allegory vs a pound of theory 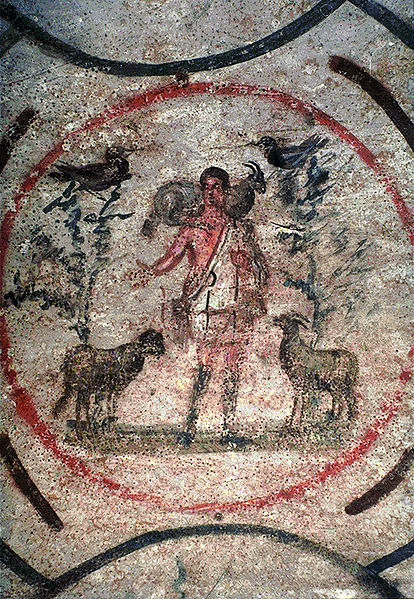 Society in our modern world is little different from the earliest societies. There are four elements: sheep, shepherds, wolves, and scavengers. The sheep are we the people. The shepherd is government, which leads, protects, and annually shears the sheep. The wolves are the corporations which run the sheep half to death, rip out their throats, drink their blood, and feed upon their flesh. The wolves leave enough scraps to feed assorted cadres of buzzards, crows, rats, and other scavengers. All have co-evolved and are mutually co-dependent. Neither the shepherds nor the wolves will free the sheep. Sheep can only escape this tightly integrated system by becoming cooperatively self-reliant.

In another analogy, the liberal class is like the Eloi in H.G. Wells “The Time Machine”. The docile and child-like Eloi would awake each morning to find food, clothing, etc. provided for them in the night while they slept. But a few of their number would also be missing each morning. The Morlocks (who lived underground) manufactured and provided all the necessities to the Eloi as they slept, but they also carted some of them away each night to feed upon them in the underground city.

This is a question of works, not words, and tactics, not theory.

Work is a matter of effort and skill, chipping away the marble or wood one blow at a time. Work is pragmatic, interdisciplinary, and non-ideological; with artistry, resource management, critical path management, management by objectives, and continuous improvement. (This sounds like a gruesome mashup of creativity, labor, and corporate culture.) Oddly enough, there once were artisans… and after a while there were workshops with masters and apprentices… and then there were schools and guilds and societies… and eventually there were corporations. This was ever-increasing collectivism. The left might be happy with this except for the now-gratuitous regimentation of life, commodification of work, and alienation from nature that came with it.

On the Hack the State site, Toni Prug writes:

Armed revolutionaries and anarchists hate the state. Social democrats want to be the state. I say we better hack it. [W]e need to Hack the State (hack as reuse by clever re-purposing of what’s already here), to make it do what we want it to do. (via Hacking the State, P2P Foundation Blog)

For the pragmatic, eclectic approach to social change I think the term “hack the state” works beautifully — at least for the digital activists and the internet-savvy white collar workers. Maybe not so beautifully for “mom and pop” or the blue-collar workers here in the US.

Curiously, many such “hacks” already exist in the history of pragmatic, progressive movements in the US. But neither the old-school socialist terminology nor the new-school computer hacking terminology sit well with much of “Middle America”.

My own tentative umbrella term for interdisciplinary hacking of capitalism, corporations, banking, property, and democracy is “Green Free Enterprise”.

Besides cooperative self-reliance and provisioning, to rise above being sheep we the peeps need to protect ourselves from the predators in society, whether they be pirates, tyrants, corporations, or corrupt bureaucrats.

When social animals and people first began to populate the earth they quickly found strength in numbers. Eventually our experienced pioneer ancestors invented the wilderness stockade to keep out unwanted intruders of both the four-legged and two-legged kinds.  But the ultimate enemy often came from within the tribe, city, or state in the form of predatory elites either in merchants’ garb or royal attire–the over-zealous wolves and shepherds and, worst of all, the unholy alliances of the two.

What philosophers of the commons often seem to want looks a lot like feudalism to me–what I might call peer-to-peer feudalism. Maybe that’s fine, but from Aristotle’s Athens to the Soviet communes it keeps turning out that mankind’s relationship with land and with materials and with tools is at its highest an intimate, personal relationship like that between a husband and a wife or a mother and child.  Managers of  giant Soviet farms found that when they gave each working family a quarter-acre of personal land, the yields on those private family plots were ten times what they were in the collective fields. Similarly, one of the most generous and community-spirited men I ever knew would not let another person handle many of the tools of his trade. In many families and communities there are “common” tools for laypeople, but many (if not most) artists and craftspeople have very intimate, personal, and private relationships with their tools. Especially where any sharpening is involved.

Again and again, socio-economic systems and institutions that work best in real life seem to be hybrid, hacked systems where there are checks and balances between the individual and the collective good; where these checks and balances evolve bit by bit over great time (notwithstanding the rare but natural socio-economic phase transitions that sometimes occur) through the agency of both obvious and ambiguous forces that are as complex as the forces of geology and evolution.

This is not to say that unguided, natural social evolution is the best thing. The point is that when we ply our arts, crafts, and trades to the canvass of culture, to the carpentry of social institutions, and to the husbandry of nature we must respect the natural, biological and psychological complexity and diversity of all life; and not the least our own lives; and be informed by the deep, fractal complexity of natural ecology and the broad diversity of form and fit that emerge from natural selection.

Just as we can think globally and act locally, we can think theoretically but act pragmatically and observe empirically.  We must continuously refit theory to the facts on the ground and in the field, confident that whatever works in practice can work in theory, but not vice versa. We must be more committed to explicit, measurable objectives than to methods or even to noble (we think) principles. There is only one essential noble principle–“the golden rule.”

The rest is sausage making.

6 Responses to “Social evolution: An ounce of allegory vs a pound of theory”